On January 28th, I made a pretty big life-changing decision. I decided to drop out.

This post was written when I was 16 years old, you can do the math how long ago that was. As such, a lot of the writing style is representative of that. This post was actually edited to redact the expletives that I had used colloquially, as much as I endorse the idea of being true to myself at the time – I’d like to keep things professional.

I’ll begin by providing some backstory. Around 5th grade I began making a decline in education. I wouldn’t have things done and I wouldn’t have things to turn in, which wasn’t good. I somehow made it out of there but I’m not entirely sure how. Once I left elementary school and got into 6th grade, I had a bit of transition. I went from this content, calm person to someone almost excited for everything that was going on. Maybe it was because of me being excited to get older, or being accomplished, or just feeling a release from a lot of burdens I had during my childhood.

I was quite similar to that of an A.D.H.D. child, which is odd considering this was unusual behavior for me. Even some people who knew me back in elementary school understood that I changed over the summer. The decline continued but yet again, I passed through. I came to 7th grade a little more calmed and beginning to become the person who I am today. 7th grade came to be the worse year of my schooling, after my general decline was confronted by a teacher’s aide who told me something that changed my year entirely. She blamed my decline on the fact that I knew about a concept the Port Huron Area School District (and possibly other schools had) called ‘social promotion.’ Now, this was ironic, because I didn’t know what the concept was, and that my decline was just me being a giant slacker (for the most part). She also explained what social promotion was in just passing, went sorta like this: “I know that you don’t have to do it because of social promotion…” Which I figured gave me a free pass through middle school, which it did. Despite my terrible grades throughout middle school entirely, I made my way to high school, but I’m not skipping 8th grade yet. In 7th grade, I ended up having personality clashes with my science teacher, and ended up getting the most items on my behavioral report in that one year alone. It wasn’t because I was truly misbehaving, it was mostly petty things that wasn’t tolerated slightly. I even tossed an eraser back at a kid who tossed it towards me, and I ended up getting in trouble for it. This didn’t help my decline much at all, as the last thing I wanna do is work for someone who doesn’t deserve it.

8th grade I tried to fix myself, and I did fairly better for the most part. I still had my faults (like failing history and English), but I knew that these obstacles could be walked through without a scratch.

After all, social promotion will come to save me from having to do my work, just so I can be with my friends.

My freshman year of high school was a breath of fresh air. I had more freedom compared to middle school and I ended up having only one teacher that I didn’t enjoy, for all the right reasons. Despite the fact that social promotion logically shouldn’t have been in effect in high school, it was. I passed freshman year only failing one class, which was English. I went to sophomore year head first. It was my favorite year of high school, and I won’t forget it. I had some fun times with my friend, Chris, and I had a teacher that absolutely despised me. The good thing about that year in terms of teachers was that I met my favorite teacher, my English teacher. Which was ironic because out of me failing classes the hardest that year, English was one of them. I met more friends that made me who I am today, and it was overall a great time. However, my decline was apparent again, as I was told that if I failed more classes after that year, that it would be infeasible for me to pass high school at Port Huron Northern, and that alternatives would have to be taken, such as a school in the district with a different requirement for credits, and night school.

Junior year. This year, or would be. I enjoyed it, it was the year Chris and I went to PAX East 2015, and I felt like I had reached the highest I’ve ever been placed. I had credential, and students who had never truly knew me supported me. Which was good, because that helped my self-esteem really well. I was told that I was my English teacher’s favorite student, which was, again ironic, because I failed English that semester as well. After I realized I had failed classes, I decided it would be in best interest for me to start school somewhere else. I joined the Insight School of Michigan, an online school ran under the wing of K12 Inc., a for-profit education company. I was able to learn at my own pace, which wasn’t an issue, but gave me some leg room to do things my own way.

If I was to rate my experience, it would be a 6/10. I learned that socialization in these online schools was a thing of the past, and that any private layer of socialization that physical schools had was eliminated. You couldn’t talk personal stuff in the live classrooms without knowing that a teacher on the other end of the internet would be able to visibly read these. When I took the ACT test, a teacher from another K12 school was there, and agreed with me on the lack of socialization. It’s important, and I found this the hard way. While I had credential, trying to get support was difficult, because once you’re gone, you’re almost forgotten. After I dropped out, my Algebra teacher at the time told Chris that ‘at least [Elliott] won’t be there to annoy you anymore.’ Thanks.

While I had my friends online, I only had few left physically. Life was becoming dull, and I found myself entering a depression. My educational decline hit rock bottom when I stopped attending the online school, and dropped out of that 2 weeks ago. I opted to try to go for the GED program, and bought a book to guide me through it. However, I’m finding it to be pretty difficult to climb up from rock bottom. I’m sabotaging my life slowly, and I don’t know where to begin on what my future will look like. I need something to help me through this but I can’t figure out what. Nothing is helping.

I just had to get this off my chest.

Here’s the comments I received when I wrote the post: 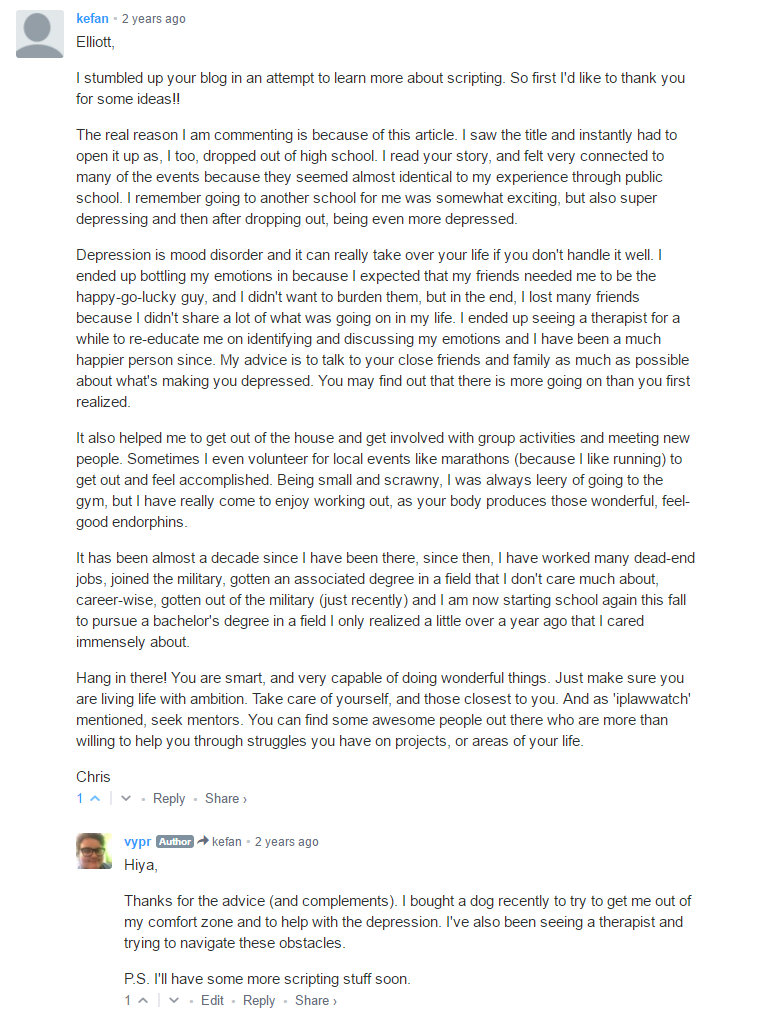 Seraphim R. Pardee The Musings of an Orthodox Christian and Software Engineer